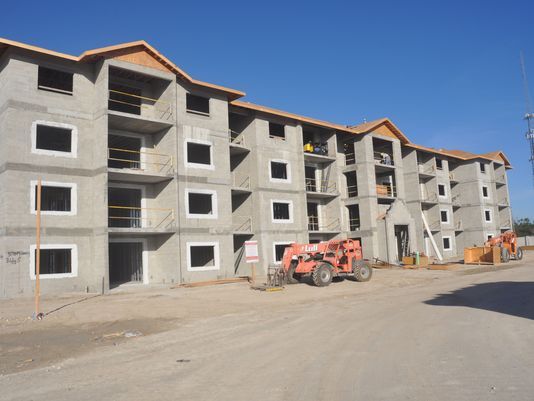 Gary Hains and David Torres took a big risk and it paid off with big success. At the height of the recession, the two men left their jobs with Toll Brothers to strike out on their own.

The move was especially risky for Hains.

“My wife told me the night before we resigned that she was pregnant with our second kid,” he said.

But Hains and Torres believed in themselves and were ready for the challenge of striking out on their own. So they created FL Star LLC.

“When you are one of those individuals that wants to be an entrepreneur, you are confident you will be successful,” Torres explained.

Their strategy was to buy now and build later.

“It was good because we weren’t building at that time,” Hains explained. “We were buying properties at the time. We were buying distressed notes.”

“There was a lot of opportunity to buy below costs and be patient,” Torres added.

So the men purchased property and were patient.

They bought land at Arrowhead in Immokalee. Arrowhead was an existing development with about 100 houses. Hains and Torres bought the remaining 229 lots. They also purchased land at Hacienda Lakes and some property off Collier Boulevard in Naples. When the economy began to revive, the men started to build. They began their first construction in Arrowhead. Soon they started building at Hacienda. Now they are constructing their first apartment complex near Collier Boulevard that will have 296 units. Milano Lakes will have eight, four-story buildings that have one-, two- and three-bedroom apartments ranging in size from 800 square feet to 1,400 square feet and price from $1,300 to$1,700 a month.

The duo believes an apartment complex is needed in the area and is a good way to grow their business.

“In Collier, you don’t get the density you get in Fort Myers,” Hains explained. “Collier is very limited. This site had the ability to have high density, and in Collier there is definitely a shortage of places for working people to live.”

“It is demand,” Torres added. “We have population growth in our area. Once you have people coming down, you have jobs and housing is expensive, so there is a market for renters, and Collier is the best because there is limited place for people to enter the market. There are limited places with high density.”

When Hains and Torres first struck out on their own six years ago, their lives changed in many ways. They became the boss, yet didn’t really live a boss’s lifestyle.

“Your lifestyle has to change slightly,” Hains said about the beginning years of FL Star.

But now with the growth in the economy and success of his business, he knows he made the right choice.

“Now prices have gone up and people missed that window,” he said.

Hains and Torres saw that window when they were working together at Toll Brothers. The men spent about 10 years with that company.

Hains became Toll Brothers Division Vice President for Southwest Florida. He was responsible for locating, financially analyzing, conducting market research and negotiating land acquisition for future development projects throughout Florida. Torres became division president for Toll Brothers Northeast Florida. He was responsible for direct profit and loss in that region and was involved in land acquisition of thousands of lots for future development.

“Getting together in this new venture just seemed a natural step,” Hains said. “We’ve always enjoyed working together. And our backgrounds and education complement each other. We’ve both been involved in every aspect of real estate development, and we share a background in finance.”

Hains and Torres are also both high achievers. Hains is a graduate of Brown University and the London School of Economics. Torres is a graduate of Columbia University in New York City, where he received a bachelor of science in civil engineering and a minor in economics.

The men took their experience to do more than simply buy land and build homes or apartments. FL Star provides management services for commercial and industrial buildings for real estate owners and condominium associations. They assist with maintenance, collection of rents and financial reporting. They also manage distressed real estate funds and look for distressed real estate opportunities for customers and private investors.

Now that business is booming, Hains and Torres can see how their risk paid off.

“I grew up in that environment,” Torres said. “My father had his own business. It was more natural to do this than working for someone the rest of my life. You just have to take the risk and be patient.”